This was the last session I shot before self Isolation due to covid-19 back at the beginning of March. At least it was a good one!!

Rachel and Zachary were in Northern Ireland for two weeks, this was their last day before flying back out to the states, in North Carolina. A week later flights shut down.

It was lashing down at the beginning of the session, we thought we were going to have to cancel. So we decided to drive for 20 minutes and hope that by the time we arrived it would have stopped raining or at least not as heavy. Thankfully it was only a little rain so we continued to shoot. To be honest, I love shooting in the rain, it makes for dramatic and romantic shots 🙂

Rachel and Zachary met at summer camp when they were 14 years old. They knew of each other for one week. Then they parted. fast forward 7 years and they both find themselves back and summer camp volunteering. One night, Zachary gave two girls a lift ( ride) when he reached their destination, he seen a girl sitting alone outside. He recognised her. It was Rachel. Naturally he went straight over to her and they got chatting and the rest is history 🙂 He still had her number from when they were 14, her number was still the same!! Also, get this, the two girls he gave a ride in his car, their names were HOPE AND FAITH!!! That was a love story that was meant to be.

Are you thinking of having an adventure session, or visiting Ireland and would love a session somewhere with some beautiful Irish castles , cliff tops some green scenery,  Just get in-touch here  I would love to hear about your plans and off course be there to document it 🙂

If you are looking for some ideas on where to have a session, check out this bog post with some of my favourite places to elope in Northern Ireland. it will give you some ideas.  Also if you are on Instagram make sure to follow me HERE for more adventures

Had such a great time with these two, Emily and Gerry both live in London,… 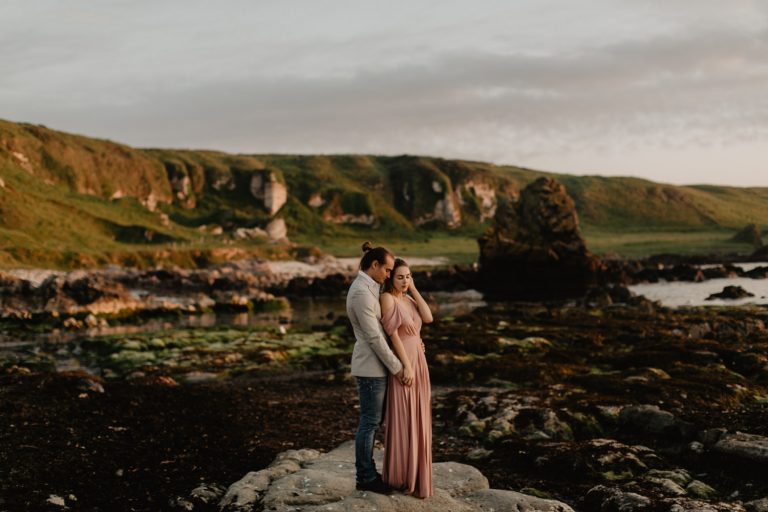 A “Far past the frozen leavesThe haunted, frightened trees, out to the windy beachFar from…